Our Journey Featuring GOOD NEWS Only 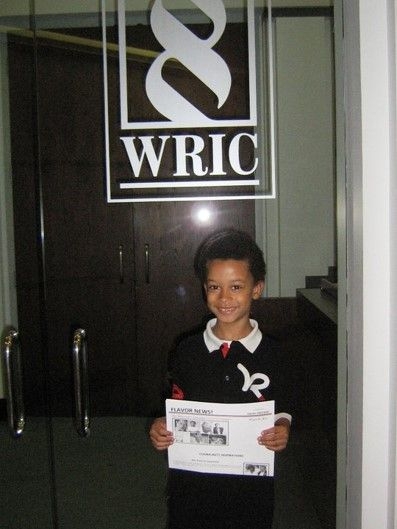 An Idea Is Born: He was just 7 years old!

In 2010, 7-year-old NyRiian Jiggetts asked his grandmother to write a GOOD NEWSpaper because he was tired of all the "bad" news.  This little boy wanted everyone to know that the bad news was frightening children everywhere.  His grandmother, Deone McWilliams, agreed and called the local television stations.

WRIC-Channel8 welcomed the two--surprising NyRiian with a tour inside an actual news room.  He then asked his grandmother to call The White House, which she did.  Dr. Jill Biden's office staff was elated to hear this news!  NyRiian received several congratulatory phone calls and letters, and the Flavor News papers were welcomed into The White House, as well as featured in 24 local Ukrop's grocery stores (thanks to Mr. Jim Ukrop) throughout Richmond, Virginia.  Although the paper ended, Deone promised her grandson (and God) the journey would continue and eventually become a worldwide publication.

In August 2014 Deone McWilliams decided to take the FAITH WALK, lost everything, and with only $22.00 to her name began writing another GOOD NEWSpaper.  After searching for a deserving community in Richmond, Virginia, she decided to assist the Northside community and began writing/creating NORTHSIDE VIBES inside a 6x9 closet at Dream Academy, which was located at the corner of Brookland Park Boulevard and North Avenue.

Every day she stood at the intersection asking travelers to invest just $1.00 a day in their businesses (advertise for only $30 per month) and began writing contracts on the hood of her mother's 1992 pickup truck.  With the kind gesture from a registered nurse who paid the 1st invoice to have the paper printed, Northside Vibes' 1st copy launched in September 2014.

To-date, not only is that little boy 19 years old (see photo), his grandmother made him the  Founder of Flavor News,  AND NyRiian is now serving his country (United States Navy) as of December 2021.  We all are so proud of him!

Yes!  God used this angel to give a message/assignment to his grandmother and with the prayers, love and support from Worldwide communities--especially Valued Advertising Clients, Deone has published Northside Vibes on the 1st Friday of 100 consecutive months--INCLUDING THE NEW NAME: GOOD NEWS USA.

WE'RE ALL NEIGHBORS GROWING TOGETHER